“The one where the group finds out about the zombie hickey”: Recap – AMC’s The Walking Dead – S01E05 – Wildfire

This is how I feel at the end of each Walking Dead episode, in case you were wondering.

Previously on The Walking Dead: Merle, who was left for dead, evidently managed to escape near-certain zombification; Our Ragtag Group of Rescuers discovered that he had done Jigsaw proud and sawed off his hand to escape cuffs shackling him to a pole on top of the Department Store Roof of Doom when a Zombie Block Party decided they wanted him to party with him like it was his birthday. It’s obvious that Merle is going to try to make the survivors who left him behind Die Hard when he comes back With A Vengeance.

Seriously, having John McClane around to go Yippie Kay Yay on zombies' asses during a zombieocalypse would be handy.

Later, Camp Survivor became Camp Non-Survivor when a pack of zombies infiltrated it, giving zombie hickeys to Andrea’s sister Amy and Carol’s emotionally and physically abusive husband Ed, much to Spidey Sense’s glee since they were on her zombie hit list. Jim also got bitten on the stomach which none of his friends saw happen and he has kept under wraps so far.

OK people, let’s get into it, shall we? As always, all picspam comes from F**k Yeah The Walking Dead Tumblr unless otherwise credited.

Sparkly Zombies: Nowhere to be seen.

Twihards Around The World: WTF?! We want a zombie to fall in love with a human survivor so much they refuse their innate urge to eat their flesh and have a half zombie-half human mutant baby, dammit!

Deputy Sheriff Rick Grimes: Talks into a walkie talkie in a desperate, though apparently unsuccessful, bid to reach Morgan and his son. He tells them Atlanta is no longer a safe haven.

Spidey Sense: *facepalm* Umm, DS, I think that the miles of deserted, wrecked cars on the highway up to Atlanta might tip them off, even though it totes didn’t register on a certain person who shall remain nameless but rode up on his literal and metaphorical high horse there.

Darryl: Is appeasing Spidey’s annoyance at the DS by exploding zombie skulls like watermelons with a pickaxe and feeding her gratuitous blood lust.

Andrea: Watches over her Soon-To-Be-Baby-Zomb Sister Amy while holding onto a gun.

Lori: Approaches to politely, kindly let Andrea know that they need to blow Amy’s brains out for the safety of the camp.

Deputy Sheriff Rick Grimes: Tries a different tac on the same subject matter but gets a gun brandished in his face for his efforts.

Spidey Sense: Can’t handle the stress of being toyed with by the director and waiting for Andrea’s Soon-To-Be-Baby-Zomb Sister to reawaken and take a chunk out of the woman’s neck any longer, so let’s go see what dependably psychotic Darryl is doing now, OK?

Darryl: Drags a dead former Non-Survivor Camp camper to a fire being used to burn random zombie corpses (is that an oxymoron?).

Glenn: Freaks out about burning bitten campers who hadn’t turned before getting a bullet in the brain.

Jacqui: Suddenly notices that Jim is bleeding on his stomach.

Jim: Tries to brush her questions aside, but the group rounds on him, forcing him to reveal his zombie hickey.

Spidey Sense: Totally understands his shyness; it’s not as sexy as a vampire bite, now is it?

Call me a Salvawhore, but I would love to be Elena in this scene!

Deputy Sheriff Rick Grimes: Wants to take Jim to the Centre for Disease Control to try to cure him while there is still time; he isn’t as far gone as Amy presumably because his bite is much smaller.

Shane: Disagrees and wants to try the local army base.

Darryl: Sneaks off to get his crossbow so he can try to put a bow in Jim’s brain.

Spidey Sense: That Darryl, he sure is a problem solver, isn’t he?

Deputy Sheriff Rick Grimes: Is right behind him though and gun raised says, “We don’t kill the living”.

Height of Irony: Equals man holding one of the living at gunpoint while saying this.

Dale: Wanders over to Andrea to try to break through to her with a story about his wife Irma, who died from cancer.

Spidey Sense Students of Zombie 101: Will know that slow moving zombies are a metaphor for slow-coming death like cancer.

Darryl: Satisfies himself with preparing to make zombie mincemeat of the corpse formerly known as Ed.

Carol: Asks to do it because it was her husband, a man she loved and feared in equal measure.

The first blow: Is almost respectful, coming from the part that loved him.

Spidey Sense: More Badass Than Tallahassee Moment of the Week for sure. 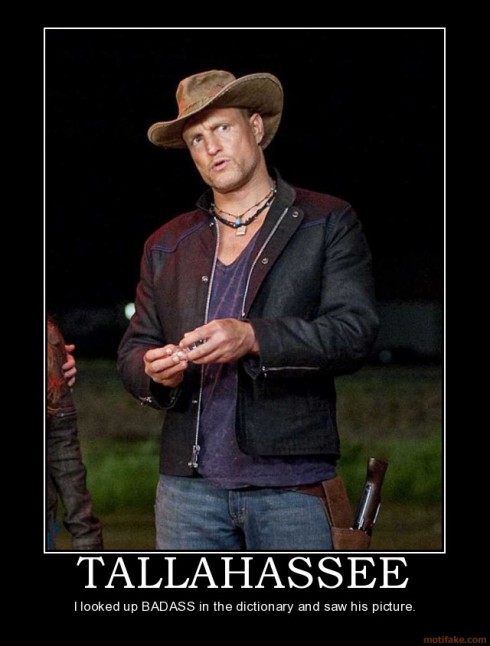 Baby Zomb Amy: Stirs and breathes, revealing an interesting mythology aspect about zombies’ physicality in this series that Spidey honestly hadn’t even considered.

Andrea: Pulls her closer even though the creature’s gaze is no longer Amy’s. She says, “I’m sorry for not being there… I’m here now…” before unloading a bullet in Baby Zomb Amy’s brain.

Spidey Sense: Awards this moment Zombie Kill of the Week for its sheer poignancy.

Jim: Starts having zombie fever dreams as he crosses over.

Deputy Sheriff Rick Grimes and Shane Walsh: Go nature patrolling to see if any other zombies are approaching. They’re startled by a sudden noise and split up, with the DS heading down a slope.

Spidey Sense: *headdesk* at the splitting up. You think they would have learned by now it is never a good idea, particular in a zombieocalypse where strength is always in numbers.

Shane Walsh: Suddenly finds him pointing his rifle at the oblivious DS, and realises how easy it would be to pick him off and make it look like an accident.

Spidey Sense: Shane’s sudden blood thirst followed by his guilt at wanting, on some level, to kill his best friend and former police partner was an acting revelation, earning the actor Twinkie Moment of the Week.

– Harsh light of next day –

Shane Walsh: Falls into line with the DS’s idea to go to the CDC, as he is horrified by the darkness he showed last night.

Morales: Decides to head out to Birmingham to meet with family.

Spidey Sense: You know how I said the s**t would hit the fan if Morales left the group? Eep!

The remainder of Our Ragtag Group of Survivors, including Jim: Hit the road for the CDC to the score of the movie “Sunshine”, which incidentally features Spidey’s favourite zombie movie sex god Cillian Murphy. 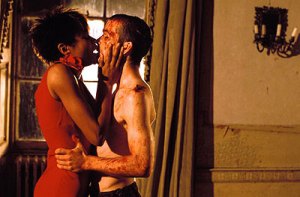 Hey Jim, I'd make out with you too even when covered with the blood of a psycho whose eyes you had just gouged out! XOXO Spidey

Jim: Pleads to be left behind a few ks into the trip, saying that his bones feel like glass and sitting in a moving van is making the sensation worse. He is left in the shade of a tree, refusing the DS’s offer of a gun because he spiritually wants to be with his zombified family.

Spidey Sense: It’s like watching a sick dog retreat into a hole to die and a very hard thing to snark.

Spidey Sense: I kinda wish they had worked a zombieocalypse into the Lost ending.

Dr Jenner: Records a video diary. He’s alone and trying to find a cure for what he calls Wildfire.

Dean Koontz: Rubs his hands together at the prospect of a government experiment gone awry.

Dr Jenner: Puts on a biohazard suit and cuts up some zombie flesh to work with. He accidentally knocks a toxic test tube into the zombie bits and has to escape into a decontamination chamber while his work goes up in flames, screaming in frustration.

Dr Jenner: Questions says he’s going to get drunk and kill himself the next day in a later video entry.

Spidey Sense: The camera then pulls wide to shows rows of empty desks, and I think the loneliness would make me go a little insane too.

– Outside CDC Hatch of Hopelessness –

Our Ragtag Group of Survivors: Pull up to the compound, which is surrounded by sandbags and copious corpses. They take down a few zombies and realise more will follow soon and that they need a plan.

Katherine Pierce: I’m still here with that alphabet of plans…

Our Ragtag Group of Survivors: How about a tomb with a mystical seal that works against zombies?

Deputy Sheriff Rick Grimes: Notices a small camera that is following his every movement. He shouts at the silent camera that the inaction of whoever is inside will kill them. 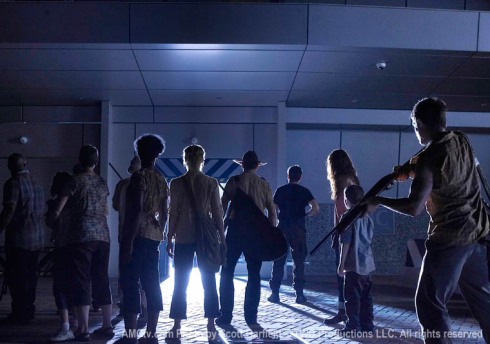 God: Let there be light!

Until next episode: Fin.

My name is Cherie, and I’m an Australian Occupational Therapy Student who hopes to help people with any condition that inhibits their ability to participate in valued occupations, tasks, activities, as I believe they’re an essential part of identity, happiness and health. My favourite occupation is hiking, which enables me to move past through the forest literally and metaphorically! END_OF_DOCUMENT_TOKEN_TO_BE_REPLACED
This entry was posted on Sunday, December 5th, 2010 at 5:33 am and tagged with The Walking Dead Recaps, Zombified and posted in The Walking Dead, Zombified. You can follow any responses to this entry through the RSS 2.0 feed.
« “I see undead people – and, um, old people”: Recap – AMC’s The Walking Dead – S01E04 – Vatos
Vampire Diaries Sensory Overload Sundays – Jeremy’s Best Looks Edition »

2 responses to ““The one where the group finds out about the zombie hickey”: Recap – AMC’s The Walking Dead – S01E05 – Wildfire”