An awesome regular male Spidey commenter, Marc, noted recently that a lot of my recaps are extremely male centric, and I must admit that there is a whole lotta truth to that statement.

But here at Spidey we are equal opportunity oglers. And even as a straight woman, I can appreciate the hotness of other women in an objective way.

So here is my first female centric post, featuring the best looks of the original sexy bitch herself, HVIC Katherine Pierce from The Vampire Diaries.

Long before Katherine had a doppelicious identical “twin” several generations removed who became the subject of the Salvatore Brothers’ affections, Kat was engaged in a ménage-a-threesome with the boys herself. The term floozy hadn’t even been invented at the time, but her lady of the manor clothing belied the twisted seductress beneath. 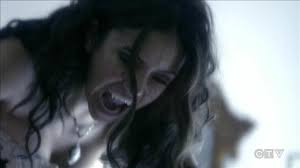 Kat doesn’t exactly eat her conquests whole after sex, but this naughty minx isn’t averse to taking a nip while getting her vamp on.

Black parasol in hand, wearing a kickass red gown that screams her seductress nature more than the pastel period dresses she usually favours, Katherine became my reigning queen of gothic chic when she discussed her exit strategy from Mystic Falls with George Lockwood.

Apparently Kat is up on her musicals – all she needs is a hickey from Kenickie and a pink jacket, and she’d be right at home at Rydell High. Heck, she doesn’t even need a Salvatore to shape up and be a man – Stefan is stronger, meaner and to her liking when she returns to Mystic Falls to stir up trouble.

Curious about what the Vampire Diaries cast thinks of actually doing a musical episode? Wonder no more!

Pouting’s not attractive on a woman her age. But having Damon Salvatore on her personage – or vampireage, I guess – is. Hey! I said I’m an equal opportunity ogler 😉

Murder On The Dancefloor Kat

In Twitterspeak, I am totally #teamkatherine. For one thing, she dispatched Thing One by first paralysing her from the waist down and then murdering her outright, with a few carefully placed blows… on a public dancefloor. Moreover, she did so without breaking a sweat or getting a single crease in her slinky little black dress.

Katherine has so many notches on her bedpost I’m frankly surprised it hasn’t whittled down into a stake that she has impaled herself on. Werewolves, vampires, and human men alike have all been wrapped around her perfectly manicured finger.

After apparently receiving Cage Sex tips from Sawyer, Katherine decided that a Tomb Cave Sex wet dream was the next best thing she could give Stefan. The hallucination was her own creation for Stefan, but she had to shimmy out of her own dress herself. So hard to get unzipping help these days, isn’t it Kat?

But it proves that she lives by this philosophy:

So there you have it, Spideys and Spidettes! Who is the coolest Kat of them all? Vote or she might not keep her claws retracted 😉

My name is Cherie, and I’m an Australian Occupational Therapy Student who hopes to help people with any condition that inhibits their ability to participate in valued occupations, tasks, activities, as I believe they’re an essential part of identity, happiness and health. My favourite occupation is hiking, which enables me to move past through the forest literally and metaphorically! END_OF_DOCUMENT_TOKEN_TO_BE_REPLACED
This entry was posted on Sunday, December 26th, 2010 at 10:30 am and tagged with Katherine, She ain't no MJ Watson!, The Vampire Diaries, Vampire Diaries Sensory Overload Sundays, Vampired and posted in She ain't no MJ Watson!, Spidey Sensory Overload, The Vampire Diaries, Vampired. You can follow any responses to this entry through the RSS 2.0 feed.
« Supes 101 – Do vampires have souls?
Mixtape Mondays – Anti Love – Spidey Bill & Spidette Sookie – True Blood – Part I »