In Defense Of Shirtless Salvatores

Oh, Vampire Diaries season one, how I miss your bountiful shirtlessness!

Shirtfulness has become an epidemic on the Vampire Diaries in the second season, when it comes to our beloved Salvatore brothers.

The Salvatores have been running around fully clothed like this is their natural state, when really the recurrence of this theme is a disaster of cataclysmic proportions like a giant meteor hitting Earth.

Sure, we’ve been given the occasional shirtless crumb, but they have been few and far between and in recent interviews, like this one and this one, Vampire Diaries exec producers Julie Plec and Kevin Williamson have said these moments will now only be worked in if they “serve” the story.

I took on the task of counting the number of Shirtless Salvatore moments in the first ten episodes of Vampire Diaries season one as compared to season two. How I suffer for my art.

There were eleven moments in season one compared to three in the second season.

So with this post I am fighting for our right to have Salvatore shirtlessness on our screens.

It’s my hope that this post will help marshal an army of fellow fangirls and fanbois to join the fight for this basic right.

Some of you might think this is just another excuse to wallpaper my blog with hot shirtless vampires. And let’s face it, I like to look at them, and so do you.

But the more I thought about it, the more reasons I could come up with for why it makes sense for Salvatore shirtfulness to be reigned in.

This post is dedicated to Amy from Imaginary Men, Julie from TV Recappers Anonymous and Jesse from Addicted to TVD Tumblr, in whom the shirtlessness force is strong.

When you’re in mortal peril, including self-inflicted danger from provoking enemies like your crazy ex with a phone call about your latest murderous exploits…

…and sticking a knife in the not-so-friendly neighbourhood werewolf…

… a little thing like putting on clothes should hardly be your priority. And if there is one thing that we can count on in the Vampire Diaries, the Salvatores will always been in some type of danger.

Humans need clothes for warmth, but temperature doesn’t affect vampires, whether hot or cold, so wearing a shirt won’t make a shred of difference to them.

KJewls, I bet you knew it was only a matter of time before I used this image again 🙂

Imagine how much the Salvatores could save on their laundry bill if they didn’t need to wash bloodied shirts anymore. Not to mention that they wouldn’t need to use so much laundry detergent, which fits in with the environmentally friendly principles of the Ian Somerhalder foundation.

The sight of these vamps each week is panty dropping for many female audience members, so it is only fair that the actors lose articles of clothing themselves.

…actors Paul Wesley (Stefan) and Ian Somerhalder (Damon) have trained to get their OhSoHot (TM Jesse) physiques, and it is a crying shame to let all their hard work go to waste. 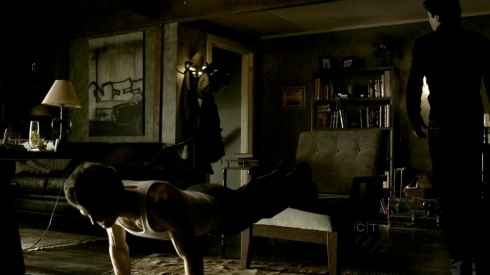 Seriously, if this was the sight that greeted me every time I went into a gym, I would never miss a session!

Ian’s shirtless fate is at the mercy of producers concerned that the nudity on the Vampire Diaries could become gratuitous, but he has been advocating against shirtfulness himself. At Paley Fest 2010, in Ian’s own words: “I ask, beg and call Julie and Kevin all the time and say, ‘Can I please get naked in this episode?’”

Who are we to deny the boy what he wants?

Shirtlessness is a reminder to approach life with a glass half full attitude.

Fangirls might be driven to desperate measures like theft if they aren’t given their little hearts’ desire.

Elena Gilbert, the human girl in love with both vampire brothers, recently discovered that her friends and family are in danger because she is a doppelganger with blood that could break an ancient curse. She has gone so far as to try to commit suicide by vampire Original in a misguided attempt to protect everyone.

Needless to say, she has been feeling depressed and needs some cheering up.

I can’t speak for Elena, but you know what always makes me feel better? I’ll give you a clue, it’s not chicken soup for the soul.

Personally, I don’t blame her for having a puss face in scenes like this where a Salvatore is in close proximity and his shirt is ON.

Vampire Diaries drinking games, like those at Forever Young Adult, that rely on the appearance of Shirtless Salvatores to work, are becoming a pale imitation of their former selves with this rampant shirtfulness.

In Paul Wesley’s case, shirtlessness displays the extremely lean physicality that he has deliberately cultivated in order to portray a vampire convincingly. 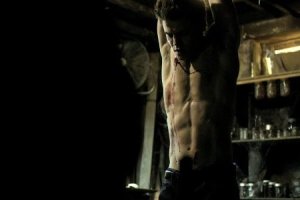 You thought I had forgotten about Bondage Stefan?! How wrong you were 😉

Here is an extract from an interview conducted with him prior to the premiere of the first season of the Vampire Diaries.

Q: What is your work-out regime? Has it changed now that you’re in Atlanta?

Paul: I’m trying to lean out as much as I can. I feel like vampires are these svelte creatures whose nutrition is essentially animal blood, so I knew that I couldn’t eat all these different carbs and sugars because it just didn’t feel right, physically and mentally. So, I’ve been limiting my intake, just because I feel like that’s what Stefan does, every day. For the first time in my life, I’ve been doing cardio. I’ve played sports, my whole life, and now I’m doing it, every morning. It sucks.

Now, notice he doesn’t explicitly say that this training approach is appropriate only for Stefan, who had reason to be even more lean than the average vampire until recently, because for years he had adhered to a strict bunny diet and refused to drink human blood.

But when you think about it, humans are just another type of animal to vampires, just like all non-human creatures are considered animals in our books. So even when Stefan and Damon drink people blood, they are taking in their equivalent of animal blood.

Ian Somerhalder hasn’t mentioned any specifics about his training regime in relation to his character, but he also has a supple frame. Maybe it’s a result of his love of dancing.

Shirtlessness is a subtle, almost subliminal, way of reminding us that these svelte creatures are vampires, much like white pancake faces are a mainstay for the vampire actors in the Twilight Saga movies.

The Shirtlessness Gods started getting agitated when there had been nary a Shirtless Salvatore since the premiere episode of season two until Katerina (S02E09).

We would be stupid to tempt fate again ;).

Speaking of Gods, I would be remiss not to include this INSANELY HOT picture of Music Sex God Brandon Flowers, also from Miss Amy!

Vampire Diaries costume designer Jennifer Bryan, in an interview with Vampire Diaries Source, acknowledged there are weird moments on set where she has to have the boys try on different shirts to see which ones will come off or on the easiest, since we quite often see them putting on or removing articles of clothing on screen for continuity reasons.

Think how much easier her job would be if they were just shirtless, all the time.

By the way, I should mention that I am insanely jealous of a job that, when you boil it down to its essence, involves getting to obsess over these boys’ bodies and what they are not wearing or wearing, as the case may be, for a living.

So there you have it, guys!

Admittedly, Julie Plec assured us that she has had a chat with Kevin Williamson about the shirtless boy drought and things are meant to change in the second half of season two.

Rumours have even emerged from the Vampire Diaries camp about a Damon bath scene (and a lucky lady is likely to be getting all splish splashy with him).

But I have been hurt too many times by the producers’ Salvatore-clothing ways of late to believe that shirtlessness will become the mainstay it once was, unless we STAND UP AND DEMAND IT.

Use Twitter tag #TeamShirtlessSalvatores if you believe in this cause :).

Thank God that in the meantime we’ve had Tyler Lockwood around to give a giant FU to shirtfulness in his werewolf transformation scenes in By The Light Of The Full Moon (S02 E11).

Now it’s over to you guys! Let’s stop this shirtfulness epidemic before it starts infecting other shows too, like the one featuring this guy…

My name is Cherie, and I’m an Australian Occupational Therapy Student who hopes to help people with any condition that inhibits their ability to participate in valued occupations, tasks, activities, as I believe they’re an essential part of identity, happiness and health. My favourite occupation is hiking, which enables me to move past through the forest literally and metaphorically! END_OF_DOCUMENT_TOKEN_TO_BE_REPLACED
This entry was posted on Saturday, January 8th, 2011 at 4:48 am and tagged with Damon, Elena, Ian Somerhalder, Michael Trevino, Paul Wesley, Salvatore Brothers, Stefan, The Vampire Diaries, Tyler, Vampired, Werewolfed and posted in The Vampire Diaries, Vampired. You can follow any responses to this entry through the RSS 2.0 feed.
« Tingling Trevino Tuesdays – Colour Blind Edition
Vampire Diaries Sensory Overload Sundays – Ian Is Bringing Sexy Back Edition »

23 responses to “In Defense Of Shirtless Salvatores”