Spidey reader Sara was disappointed last week when no gratuitous shirtless shots of Trevino were included in TTT, as an act of rebellion against the jackassery of his character Tyler Lockwood on The Vampire Diaries of late.

Well, Sara, I can’t bear anyone to be disappointed by lack of Trevino shirtlessness.

Looks like we’re not the only ones happy with this idea!

Just think of this as Spidey’s Anatomy. Only who needs McDreamy when you can have McWolfy?

Don’t know what this is?

No worries! I totally paid attention during the Ancient Greece unit in history. Being a study geek back in the day has its fringe benefits.

An Adonis Belt is those lovely curved grooves of a man’s hips in the lower abdomen.

Never thought I would ever say this about spandex, but, yes, yes, I do, Tyler!

You might even consider it “V” marks the spot. If only all treasure hunts were this much fun 😉

Pacey Witter: “You know, it’s no wonder we have such an obsession with the posterior. It’s impossible to get a good sense of one’s own butt, you know?”

Blogger pal Amy is a huge fan of one Mr Joshua Jackson. In fact, one might even call her…

This is my blatant, manipulative first step of my campaign to convert her into a Trevino/Tyler lover, through positive association.

I know it’ll never happen, but if it gives me the excuse to break out Pacey, so be it 😉

Anyway, Trevino!Ass received so much spotlight in the Crying Wolf episode it practically deserves its own trailer. I mean, it probably  already has one of those special chairs only TV and movie stars sit in.

Hi Trevino!Ass. So nice to meet you finally. I look forward to getting to know you better when Tyler comes back.

These babies should come with a warning label.

Possible symptoms of staring at them too much?

Heart palpitations, shortness of breath, pupil dilations, the tendency to scream at your TV screen, “Take me on the floor, you dirty hot werewolf!” 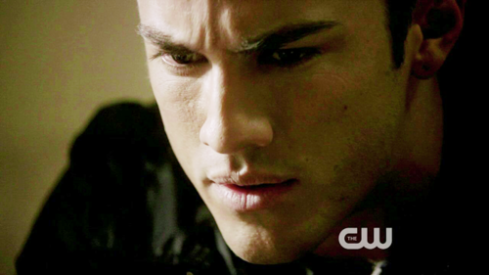 Seriously, his brow must be SO DAMN TIRED at the end of a work day.

The Windows To The Soul

As Tyler, Trevino has dark, piercing eyes that always look so damn intense.

Sometimes, though, they turn gold with amber flecks, like when Tyler is having werewolf PMS.

Just as long as they never turn a liquid topaz colour, it is all good.

Oh, c’mon, this isn’t True Blood; you’re never gonna see that. Plus, I’m pretty sure that Eric has a TM on GP.

But, what would the appropriate reaction by if you saw Tyler’s equivalent?

“Break me off a piece of that!”

Well, Trevino!Legs haven’t really made an impact on me, other than Tyler left town with his tail between them… treating us to the ultimate in Lupining Tyler.

Amy posted this treat on my Facebook page, and I can’t deprive you all of it any longer

For any men experiencing adequacy issues right now, don’t worry; even Trevino has his bad hair days… emphasis on the hair.

In other Trevino-related news, Tyler/Caroline fangirl Gen of txgirl0302 Tumblr and I were discussing 300 Tyler…

… who made his appearance in season one Vampire Diaries episode Haunted.

Here are some pics from the 300 movie (the plot is incidental IMO):

What do you think?

If you had the power to script one Vampire Diaries episode, what would you have happen?

Lastly, here’s a link to a clip I Heart Vampire Diaries took of a small part of Trevino’s interview with Loveline. Although the clip was so short it doesn’t really cover anything too new, it is worth listening to for Trevino’s sexy, sexy voice – and sweetness – alone.

My name is Cherie, and I’m an Australian Occupational Therapy Student who hopes to help people with any condition that inhibits their ability to participate in valued occupations, tasks, activities, as I believe they’re an essential part of identity, happiness and health. My favourite occupation is hiking, which enables me to move past through the forest literally and metaphorically! END_OF_DOCUMENT_TOKEN_TO_BE_REPLACED
This entry was posted on Tuesday, February 15th, 2011 at 12:38 pm and tagged with Cheesy music, Clueless, Eric, Michael Trevino, The Vampire Diaries, Tingling Trevino Tuesdays, Tyler, Werewolfed and posted in The Vampire Diaries, Tingling Trevino Tuesdays, Werewolfed. You can follow any responses to this entry through the RSS 2.0 feed.
« Mixtape Mondays – Usher Mix
SPOILER WHORE Got Forwood – Tyler & Caroline Speculation – The Dinner Party – Vampire Diaries »