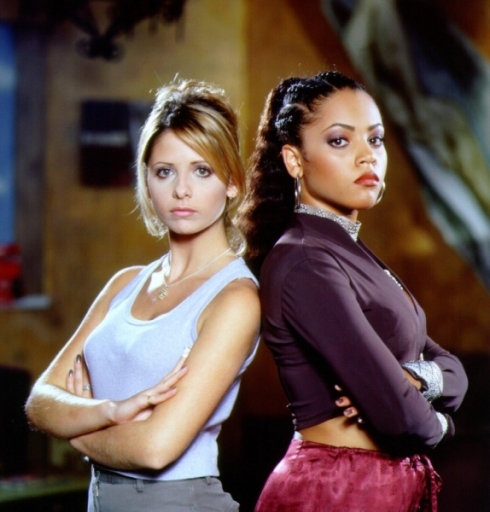 Angel in peril is a new thing for the show, and I really enjoyed it not being Cordelia for a change. It also helps that we were given a more appealing side of him in Part One, so the audience is even more invested in his safety now.

The contrast between Kendra, the traditionalist vampire slayer, and Buffy the unconventional rebellious slayer is interesting. There’s also this extra level of interesting characterization, where Buffy suddenly feels protective about her identiy and resentful of it being co-opted by this stranger — an identity that we’ve seen her resenting and only accepting in resignation so far in the series.

Anyway, Kendra is a legit Slayer, and this brings up some neat stuff. First of all you have the fact that Kendra coming into the picture means that Buffy has a chance of having an actual career. It’s potentially incredibly freeing, especially after how trapped Buffy was feeling in the last episode. The other thing that Kendra’s appearance does is it creates a nice contrast between the “proper” way of doing things (aka the way Kendra does things- by the book) and Buffy’s less orthodox way. I also think that Buffy is a little jealous of how well Giles and Kendra are getting along. Both of them do things by the books while Buffy is an off the books kinda gal. I love this little exchange:

Buffy: I don’t take orders. I do things my way.
Kendra: No wonder you died.

This comes back later in the episode where Buffy doesn’t go back to Giles like she should and almost gets killed. Kendra, on the other hand, did follow procedure and brings the Scoobies back with her as reinforcement, saving Buffy’s life. And I do love the Buffy and Kendra ended up parting ways as friend, each having learned a bit from the other

Willy! To the not-rescue! I love how Angel’s shirt has peeled open in the struggles NATURALLY. LOLOL

“What are you going to do with him anyway?
“I’m thinking, maybe dinner and a movie. Don’t want to rush into anything. I’ve been hurt, you know.”

Cordelia and Xander working together! That’s even more exciting than them making out!

You know, I do like Angel very much. But I still really I enjoyed Drusilla getting in a little bit of torture as she discussed what he did to her family. There’s so much mental scarring and desire and hate mixed up on there, and I love this little moment when the rage rises up out of the Stockholm Syndrome and psychic confusion. When she’s like, I remember everything you did to my family and now you’re going to HURT for it like I hurt.

(This is one of the reasons why Drusilla is an interesting case that raises serious questions about the human self being erased by vampirism. Especially since… Angel traumatized & tortured HUMAN Drusilla until her mental facilities frayed. And THEN he turned her. If it’s just a demon with memories, it makes zero sense that this demon would so completely overwhelmed and broken by the torment that human went through and the horrible death of everyone that human cared for. Why would something that was just a demon care what had happened to its human shell? Why wouldn’t the demon just make use of the factual information it has inherited and be on its way, totally normal & without any effects of trauma? Because the legend is wrong, in my opinion.)

Buffy being jealous of Kendra feels like almost this sibling deal.

“Angel’s our friend! Except that I don’t like him.” – this is a moment where I loved Xander a lot. He knows Angel, even if he dislikes and resents him. And he’s going to back up Buffy here like a real friend would.

“I’d rather be fighting you anyway.”
“Mutual.”
I WOULD LIKE TO ADD MY SUPPORT FOR THIS AS WELL.

It’s interesting because now the dynamic between Spike and Drusilla has switched, with him hurt and her back to full strength.

One response to “Buffy Rewatch – What’s My Line Part II”