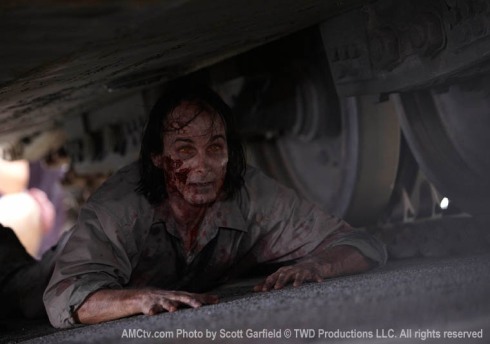 Sorry this one's late kids! But can you resist this face?

Previously on The Walking Dead: Deputy Sheriff Rick Grimes headed into Atlanta and what turned out to be the zombie capital of America. He was saved from being zombified by Spidey Sense’s newly anointed Walking Dead TV Boyfriend Glenn, who had been on a scavenger hunt for food and other supplies with a group of survivors. One survivor, Merle, was an equal opportunity bigot who discovered karma is a bitch when, through a series of circumstances, found himself handcuffed to a pipe on the rooftop of a building surrounded by a Zombie Block Party. The others escaped and drove off into the metaphorical sunset towards Camp Survivor, Glenn in a kickass sports car Spidey would go on a joyride with him in any day. The latest episode is filled with frogs and princes, but falls short of delivering a rain of toads.

Let’s check it out, shall we?

Merle’s marbles: Are almost all lost and the few remaining ones left are all over the place.

Merle: Looks red raw from the sun and is clearly going a little crazy, rambling about being in the hole and the military. He throws the word “pussy” around a lot for good measure.

Spidey Sense: Erm, for those wondering, Merle is what we call a FROG.

Merle: Prays to Jesus to take the shackles off hands so he can GTFO of there.

Spidey Sense: If they’d played that Shackles (Praise You) song in the background of that scene it would’ve been AWESOME.

Karma: Is now being a complete and utter bitch, because zombies start pounding at the door, just barely kept in check by the padlock and chain combo T-Dog attached.

The Zombie Block Party: Apparently wants to be part of the next best thing to a Mile High club.

A hacksaw: Is on the ground nearby winking temptingly at Merle.

Spidey Sense: God, imagine if this zombieocalypse is all just some elaborate plan from Jigsaw to test the survivors’ will to live?

Morales: Tries to console the guilty-feeling Deputy Sheriff Rick Grimes with the fact that no-one is really going to miss Merle.

Glenn: Happily puts the pedal to the metal.

Spidey Sense: Is glad to see that Grand Theft Auto loses none of its allure in a zombieocalypse.

Shane Walsh: Shows he’ll do his part to hunt and gather for the camp by… bringing home the frogs’ legs?? Though a frog who catches frogs – how fitting!

Lori and Carl: Don’t seem too excited by this fine dining.

Willow: I have frog fear!

Spidey Sense: Hopes no cute green tree frogs were harmed in the process of making The Walking Dead.

Glenn: Suddenly pulls up to Camp Survivor with his alarm blaring loud enough to wake the undead.

Shane Walsh: Helps turn the alarm off and then chastises Glenn for potentially drawing such attention.

The Truck of Tearaways: Pulls up and the survivors pile out.

Andrea and Amy: Have a tearful sisterly reunion that doesn’t move Spidey.

Spidey Sense: You know how The Vampire Diaries has Useless Aunt Jenna? Try imagining two of her!

Amy: Is not to be confused with the awesome blogger behind Imaginary Men!

Deputy Sheriff Rick Grimes: Hangs back until he sees Carl and Lori.

The Trio: Exchange a big family bonding hug that DOES move Spidey. 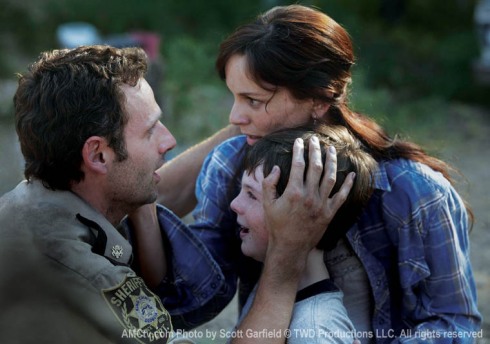 Lori: Looks over at Shane, who nods imperceptibly as though to acknowledge their days of freaky zombified sex are over.

– Later that night at Campfire of Kumbaya-ing –

Carl: Tells the DS his mum told him her was dead.

Lori gives Shane Walsh: The same look that Lafayette gave the rednecks in Merlottes when he removed his earrings upon hearing they wanted to return the “AIDS burger” he had cooked.

Shane: Tells the DS he barely got his wife and son out of Zombieland.

Ed: Who is also sitting by the campfire with his wife Carol and daughter Sophie throws a gigantic log onto the fire.

Shane Walsh: Tells him off because a big fire could attract the zombies.

Ed: Doesn’t really seem to respect the authority of Shane Walsh and shrugs his comments off.

Spidey Sense: Kinda loves Ed even though he is actually a bit of a douche and logically, rationally speaking Shane is probably right in this situation.

Shane: Takes the log out of the fire and stomps its embers out like the little kid he is.

Ed: Passive-aggressives his annoyance with Shane out on Carol, who seems like a sweetie, so now is on Spidey’s zombie hit list.

Dale, the DS, Glenn and T-Dog: Debate the best way to break the news about Merle to his brother.

Deputy Sheriff Rick Grimes: Wants to be honest and take the fall.

Lori: Hearts the DS and tells him she is sorry for all their petty fights pre-zombiocalypse.

The pair: Get snuggly.

Carl: Is in the same tent and hopefully sleeps through the experience, because watching two parents get it on would scar any kid for life, more than a zombieocalypse ever could.

– Outside the Tent of Tenderness –

Shane Walsh: Polishes his gun alone in the darkness.

Spidey Sense: Don’t worry Shane! There are plenty of zombies and frogs in the sea for you!

– Harsh light of the next day –

Glenn: Watches the dismantling of his sports car for its parts with the same level of offence a nun would take if asked to do a striptease or if Spidey Sense was told by Julie and Kev she’d be denied Shirtless Salvatores for another nine episode run.

The DS: Breaks the news to Lori that he will need to return to Atlanta to save Merle.

Lori: Is understandably not too pleased about this after basking in the glow of DS make-up sex.

Kids including Carl: Scream from the edge of the woods and the others hurry over.

Orc Zombie: Is crouched over a fallen deer with a bunch of arrows sticking out of it, apparently the handiwork of a random hunter.

Bambi: Has bitten the dust!

Spidey Sense: God! These guardians are worse than Useless Aunt Jenna, letting kids wander around by themselves during a zombieocalypse!

The presence of Orc Zombie: Is a little freaky for the survivors, suggesting that the creatures are having to venture further out of the city to find fresh food.

Orc Zombie’s head: Awesomely starts moving like a cockroach torn in half.

Darryl: Walks out of the woods holding several dead squirrels and a crossbow, and shoots an arrow straight into the brain of Orc Zombie head, earning himself Zombie Kill of the Week.

The gang: Breaks the news about Merle.

Darryl: Takes it incredibly well and reassures them they did what they had to do.

Spidey Sense: No, sorry, that was his Bizarro World reaction.

Darryl: Pulls a knife on the DS. Deputy Sheriff

Rick Grimes: Manages to get Darryl into a sleeper hold and gives the man his word that he will rescue his equal opportunity bigot brother.

The DS: Has edged his way slightly back into Spidey’s heart.

The DS: Puts on his Sheriff uniform… 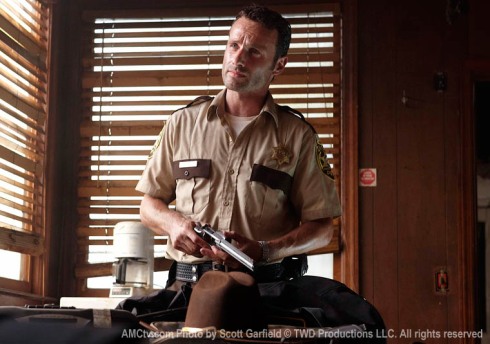 Look, I'm not made of stone and I use this image as proof that he is pretty undeniable in his Sheriff uniform

And then he: Volunteers Glenn to come along with him FOR YET ANOTHER SUICIDE MISSION!

T-Dog: Knows he is a series regular so puts his hand up to go in too, but at least he gets to volunteer himself.

Shane Walsh: Argues against the insanity of going back for Merle.

Shane: “Why would you risk your life for a douche bag like Merle Dixon?”

Spidey Sense: Can’t believe she is gonna do this, but is awarding Shane Twinkie Moment of the Week for that little gem.

Deputy Sheriff Rick Grimes: Mentions that it wouldn’t hurt to get back his dropped bag of guns and ammo, considering they have four bullets left at the camp and a ZOMBIEOCALYPSE going on. He also wants to stay true to his word and get in touch with Morgan and son via walkie talkie.

Say it with me: Awww!

The DS, Glenn, T-Dog and Darryl: Head back to Atlanta with one round each.

Spidey Sense: Hopes they have awesome ninja skills because this is hardly going to keep the Zombie Block Party at bay.

Shane: Stays back at the camp.

Shane: Later tries to have a moment with Carl showing him how to hunt for frogs.

Lori: Tears him a new one for insinuating himself into her family and tells him to stay the hell away from Carl, especially since he had told her the DS had died.

– Department Store of Doom in Atlanta –

Our Ragtag Group of Rescuers: Have made it back to where they last left Merle unscathed so far.

Darryl: Takes down a female zombie with an arrow and is an awesome shot.

– Back at Camp Survivor –

Andrea: Tries to get male chauvinist Ed to help with the washing.

Ed: Is all Bitch, please, makes some misogynistic remarks for good measure, and demands that Carol leave with him.

Jacqui: Wants to know if he is taking her away so that Carol can turn up with more bruises later.

Shane Walsh: Beats Ed to a pulp, though there are probably a few punches thrown in because of the reappearance of the DS.

– Back at Department Store of Doom –

The Zombie Block Party: Has evidently changed locations because the stairs leading to the department store roof are conveniently zombie-free.

Our Ragtag Group of Rescuers: Use bolt cutters to open the padlock on the door and head out onto the roof. 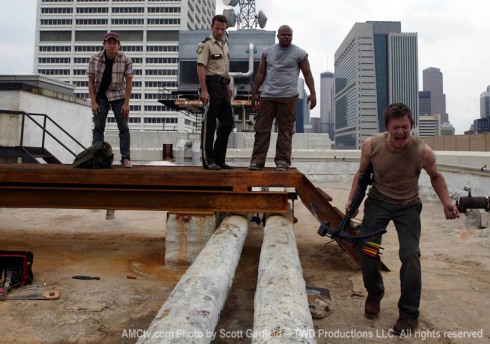 Merle: Is clearly the only candidate for More Badass Than Tallahasse Moment of the Week for this episode.

Until next episode: Fin.

My name is Cherie, and I’m an Australian Occupational Therapy Student who hopes to help people with any condition that inhibits their ability to participate in valued occupations, tasks, activities, as I believe they’re an essential part of identity, happiness and health. My favourite occupation is hiking, which enables me to move past through the forest literally and metaphorically! END_OF_DOCUMENT_TOKEN_TO_BE_REPLACED
This entry was posted on Wednesday, November 24th, 2010 at 12:45 pm and tagged with The Walking Dead Recaps, Zombified and posted in The Walking Dead, Zombified. You can follow any responses to this entry through the RSS 2.0 feed.
« Mixtape Mondays – Spidey Damon is a Sexy Beast Edition – The Vampire Diaries
“Jack-Jack-Jackieeee!” – Music Video Recap – Jackie – BZ featuring Joanne »